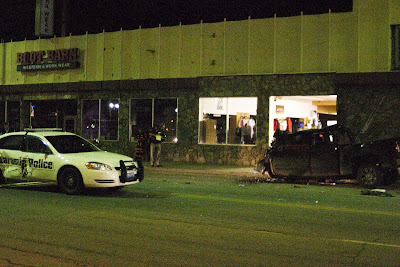 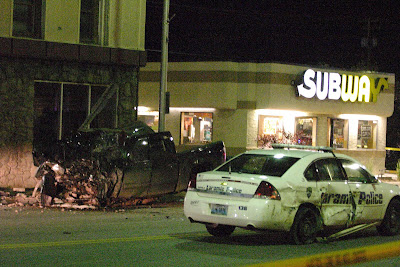 According to the Laramie Boomerang, I've changed my name to "Courtesy Photo", (4JUL2010, pg 5). I used this incident as the basis for a 55-word story that I had to write for one of my classes, in which the first line had to have ten words, the second nine, etc. until the last sentence was a single word. :
He came into to town in excess of 100 mph.
He had all of his sheets to the wind.
He was breaking as many laws as possible.
With many police cars in hot pursuit.
He misjudged the corner by far.
He hit a police car.
He lost all control.
He rolled over.
Broken neck.
Paralyzed.
The last three lines are speculative; I don't know for certain that the truck rolled over, or that the driver broke his neck, or that he's paralyzed.
Posted by Doc at 5:00 AM