I’m currently working on a project titled “No Longer Populated”. I’m drawing a parallel to how the landscape changed during the nineteen-sixties when the Interstate highway system replaced many of the existing rural highways; for example, the Lincoln Highway, and the most famous of all, Route 66. The parallel I’m working on, however, is to go back an additional thirty to sixty years. With the advent of the electric-diesel engines that came about in the late nineteen-twenties and early nineteen-thirties, many towns and train stops became obsolete, and were abandoned. This project is primarily focused on Albany county, Wyoming; but may expand to adjoining counties and states.
The image here is of the famous Ames Monument, near the abandoned town of Sherman. 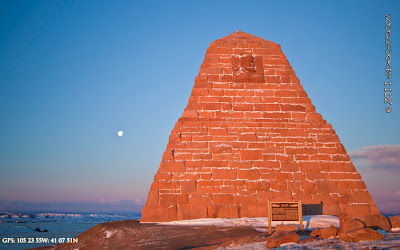