This weekends Wyoming Art Party Pop-up Art Show & Gallery Walk was a success! I want to thank Ryan at Hero Depot, Meg Thompson & June Glasson at the Wyo Art Party, and Trey Sherwood & Carly-Ann Anderson at the LDBA for making this possible.
I presented work from both Historically Insignificant & By-Passed. Including four new works that I will publish later this week.
I made this series of images this morning before taking everything down. Ryan had a special event there after the show ended. I added an extra image for the wall with the worst amount of glare...
As always, click on the images for a larger version. 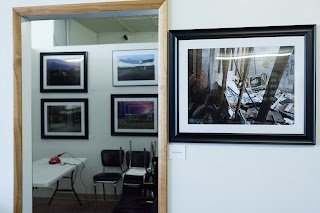 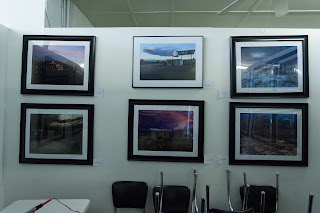 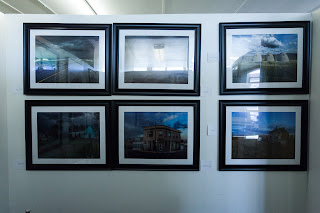 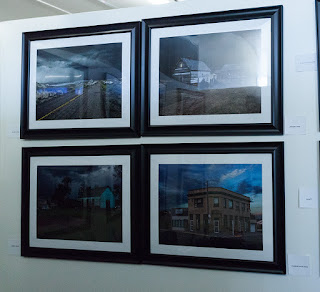 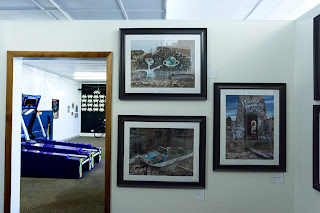 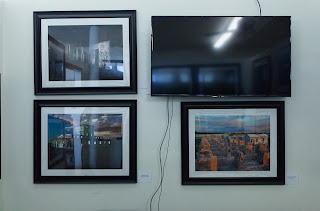 Tree Near the Highway

While this isn't a new image, it is one I recently rediscovered. There's a tree I've always been drawn to near my home; I always knew I would capture it, but I would need just the right sky. I think I was successful. 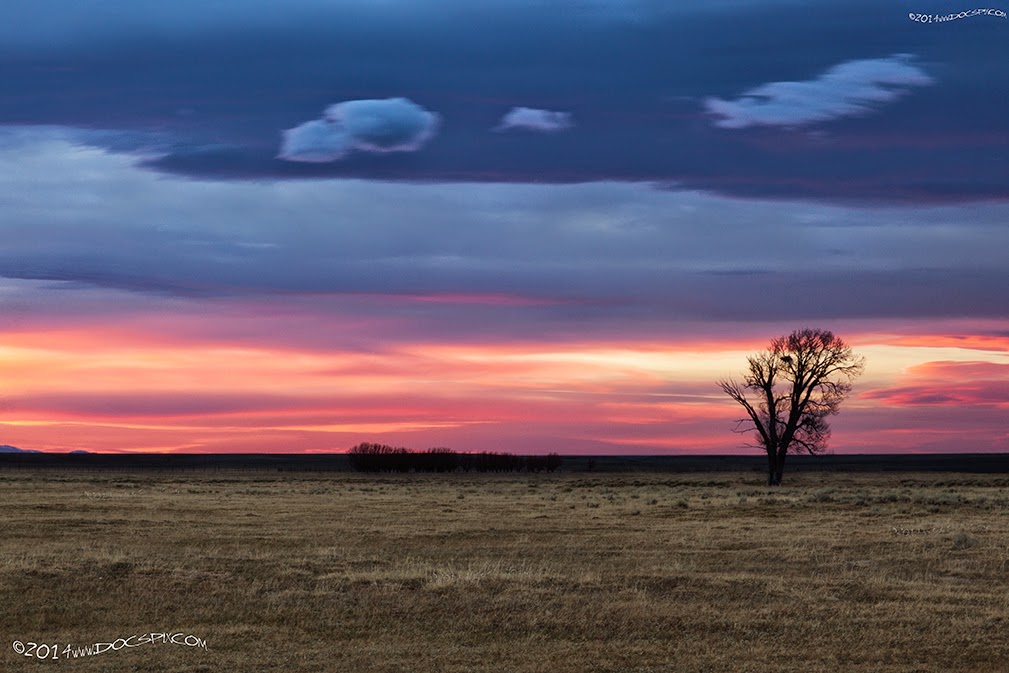 By-Passed: Stories from the Lincoln Highway Across Wyoming

This project started with the examination of Bosler, Wyoming. As I was researching the history of this modern ghost town; I began thinking about what caused the demise of this place, and then I became curious about the other towns along the Lincoln Highway. One question came to mind: "How many more Boslers are there?" As a part of my research on the Make No Roads project, I acquired a number of maps and other materials including a copy of a 1949 Rand-McNally Road Atlas. I compared this to the 2009 version, and discovered that there were a substantial number of towns that either no longer existed, or were bypassed when Interstate 80 was officially opened in 1977; (most of the highway was opened prior to 1971, but there were two minor additions added in 1977). This became the impetus for this new project. The towns I'm going to investigate will meet certain criteria; they were bypassed by the Interstate, have suffered economic atrophy from the same, and have seen a drastic decline in population over the past 40 years. No town with a current population over 1,000 will be scrutinized, with only two exceptions, (this will be announced later).
In addition to the towns of Sherman, Wyoming, (a.k.a. Two Rivers), and Bosler, I've begun to research and document the towns of Rock River, Medicine Bow, and many of the other forty-two towns and places.
(Please click on the images for a larger view) 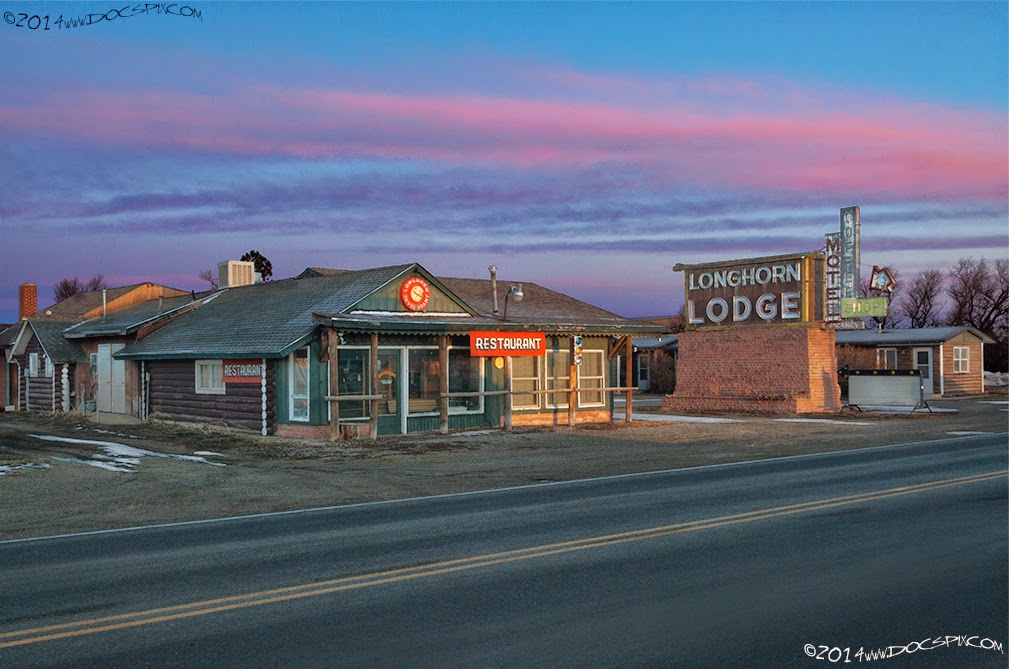 The Longhorn Lodge Motel in Rock River is open during the summer months. 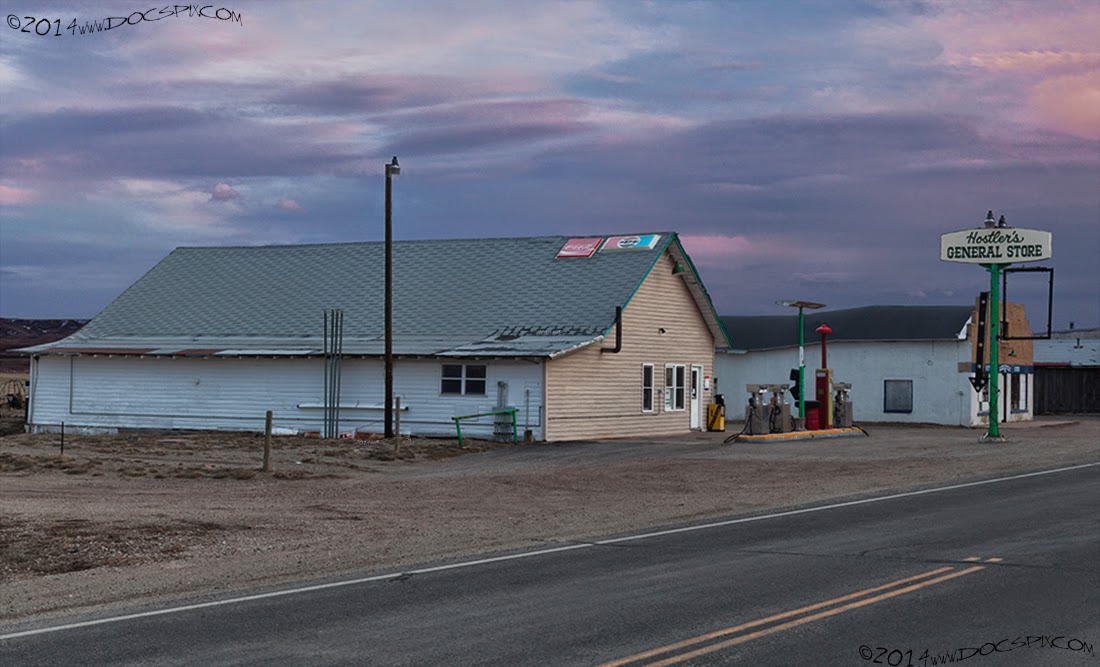 Hostlers General Store has everything for the weary traveler. 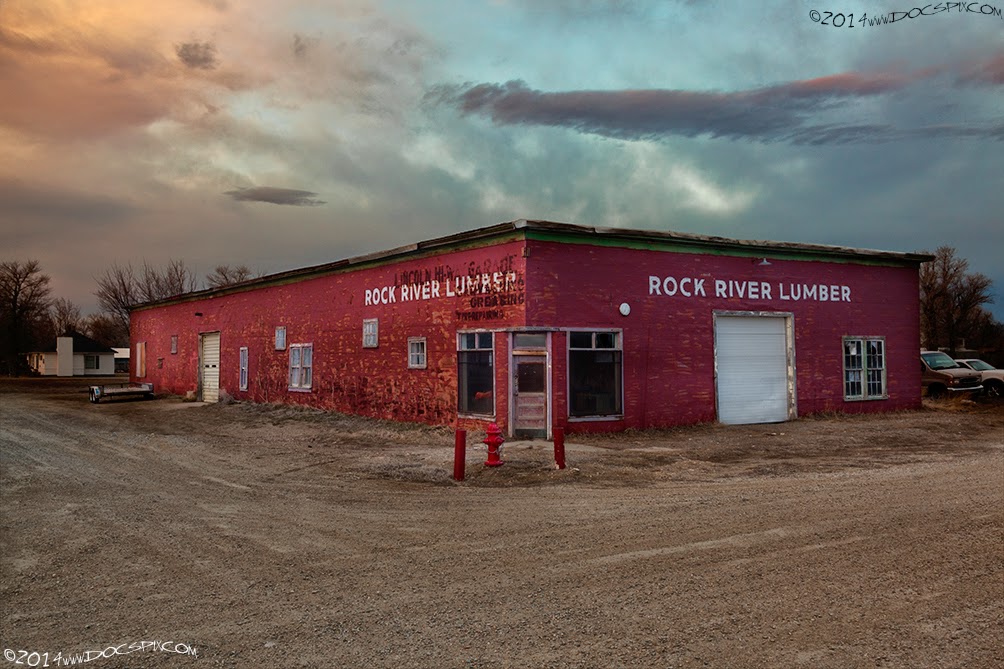 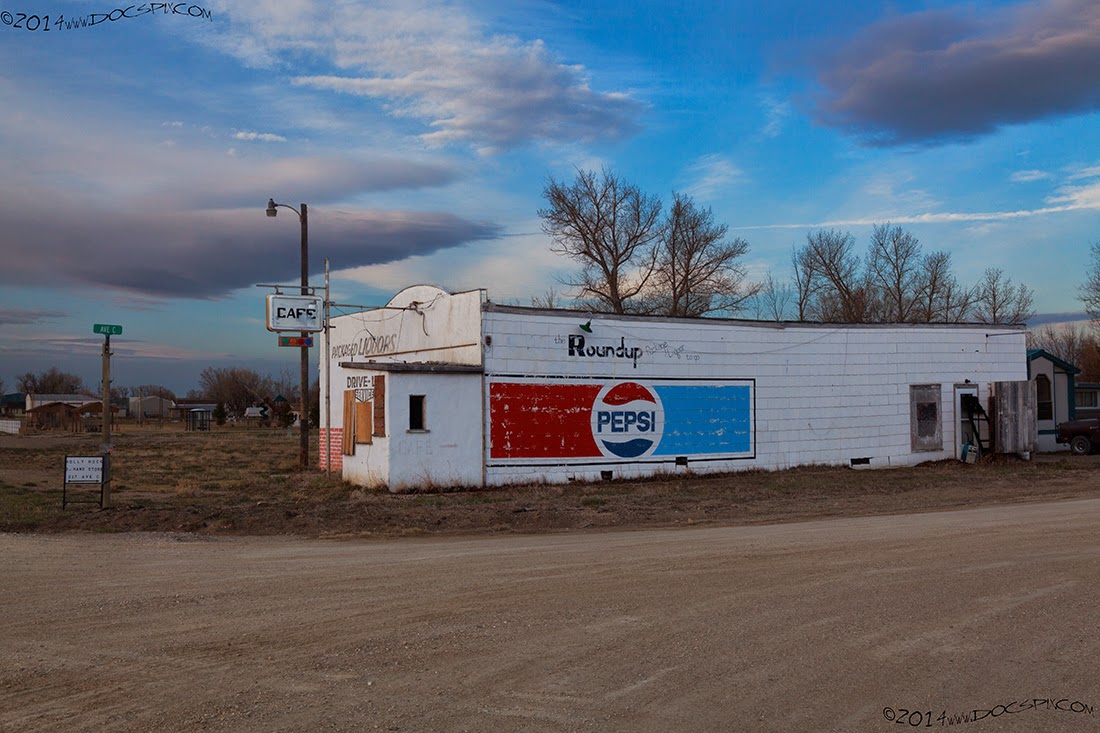 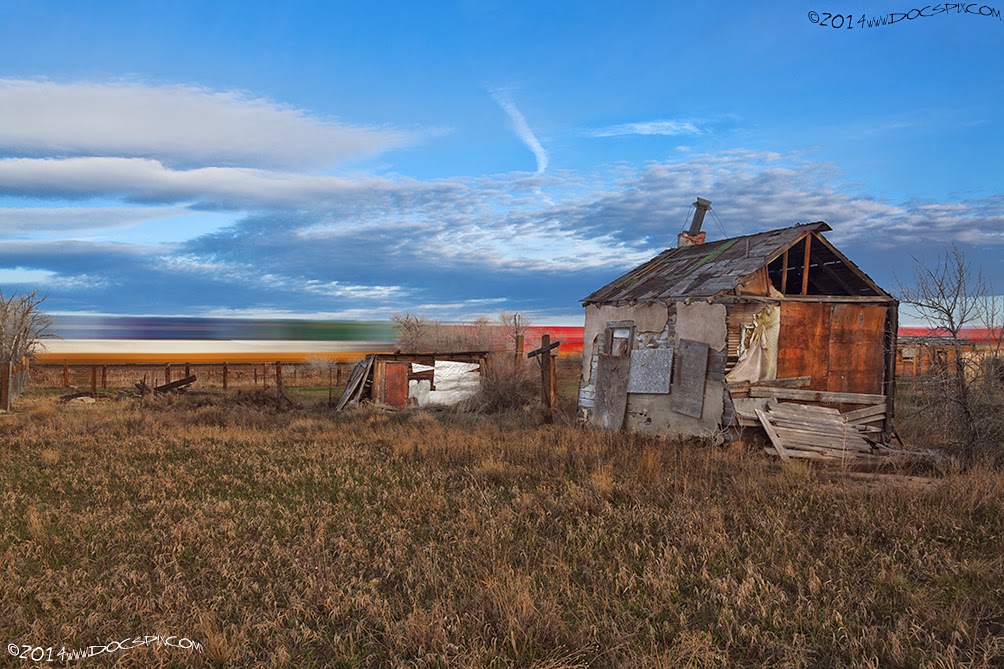 According to the Albany County GIS web site, this location is listed as residential vacant land. It backs up to the Union Pacific rail line that originally stopped in Rock River. 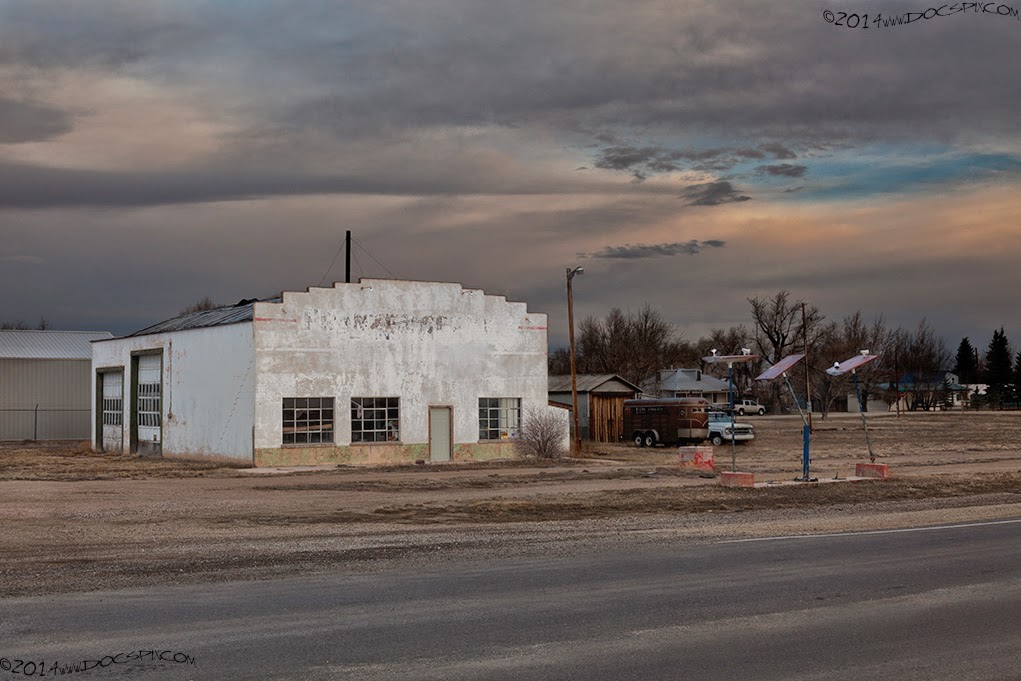 This service station was built in 1925. 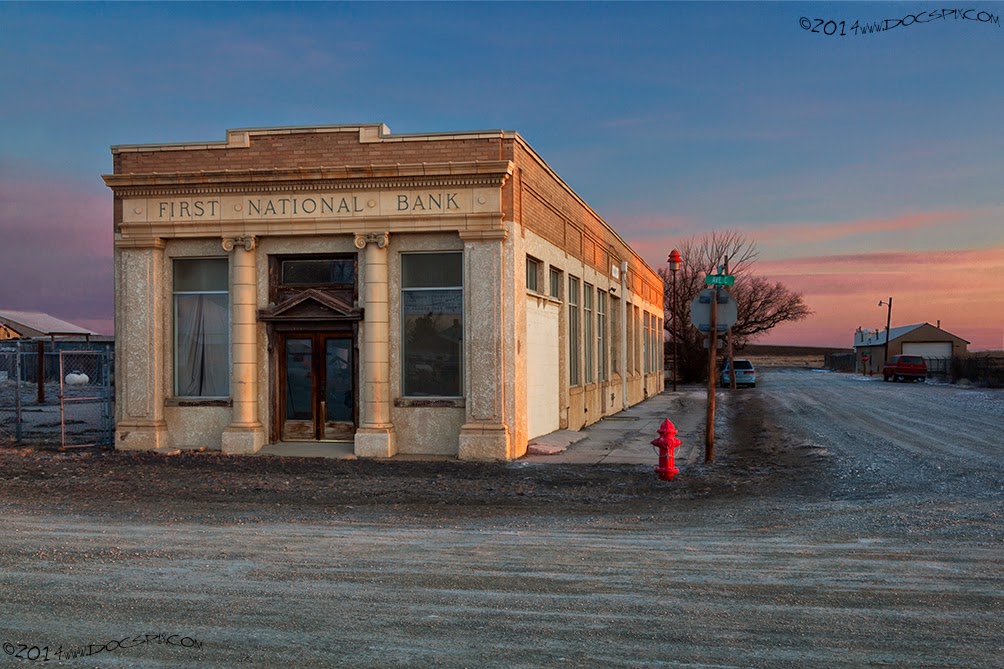 The First National Bank building in Rock River was built in 1929, it had a jail inside. It was later used as the towns fire station. 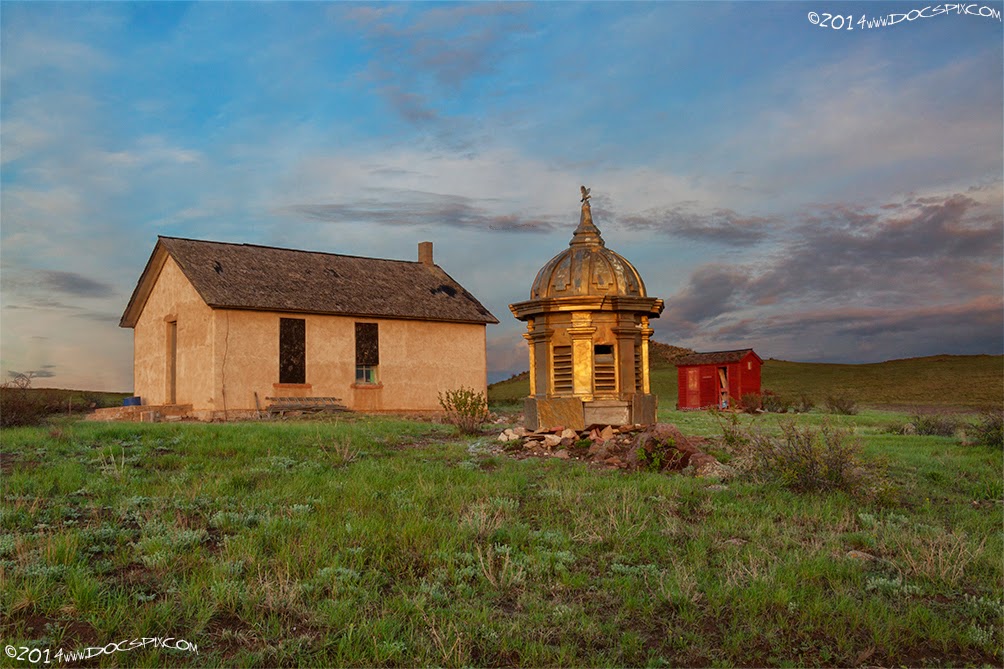 One of the towns that was west of Cheyenne was named Granite Canyon. This school was opened in 1892. 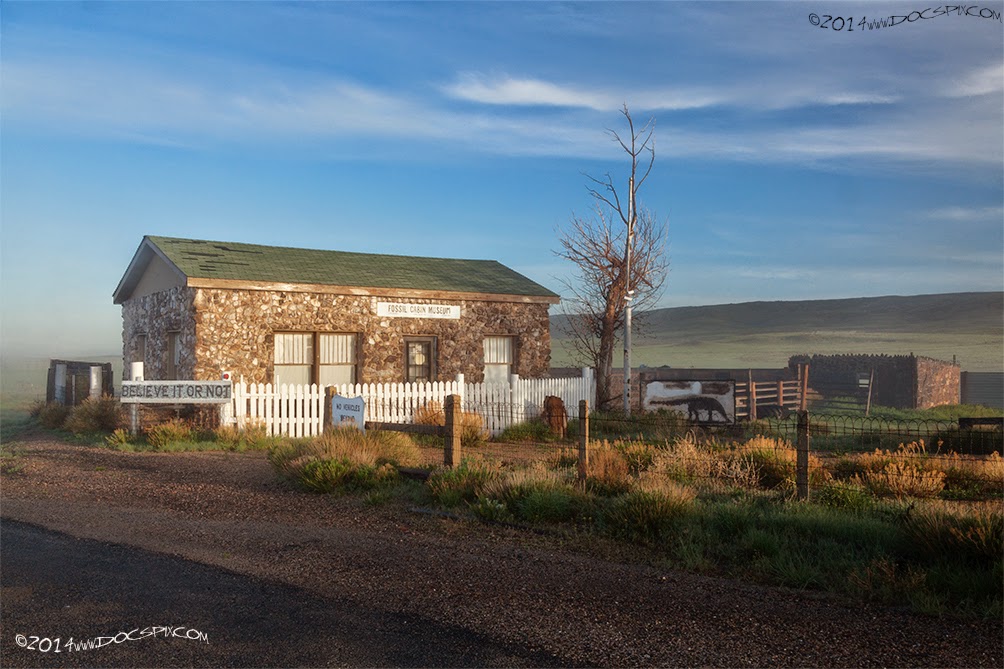 Located near the "dinosaur graveyard" of Como Bluffs; "The World's Oldest Cabin" was built in 1932, it's made entirely of dinosaur fossils.

This house is located near the intersection for Lookout, about five miles north of Bosler. It was constructed in 1935, and it sits as a lonely sentinel watching over the traffic passing by.
Posted by Doc at 10:21 PM No comments: 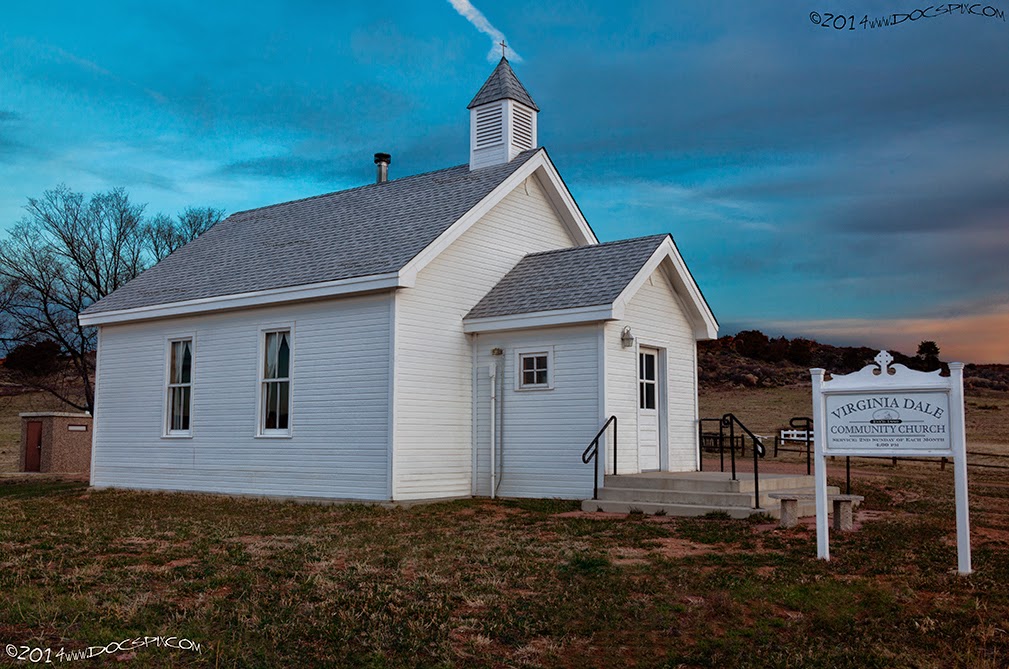 This church was rebuilt after it was burned down on November 16th, 2003 by what is termed as a "vanity arsonist". It was a 20-year old firefighter who set the church afire in hopes of becoming recognized as a hero. Church and community members rebuilt the church and it reopened on June 27th, 2004. This local landmark has been here since 1880; and they still have services every second Sunday of the month. More information: Virginia Dale Community Church 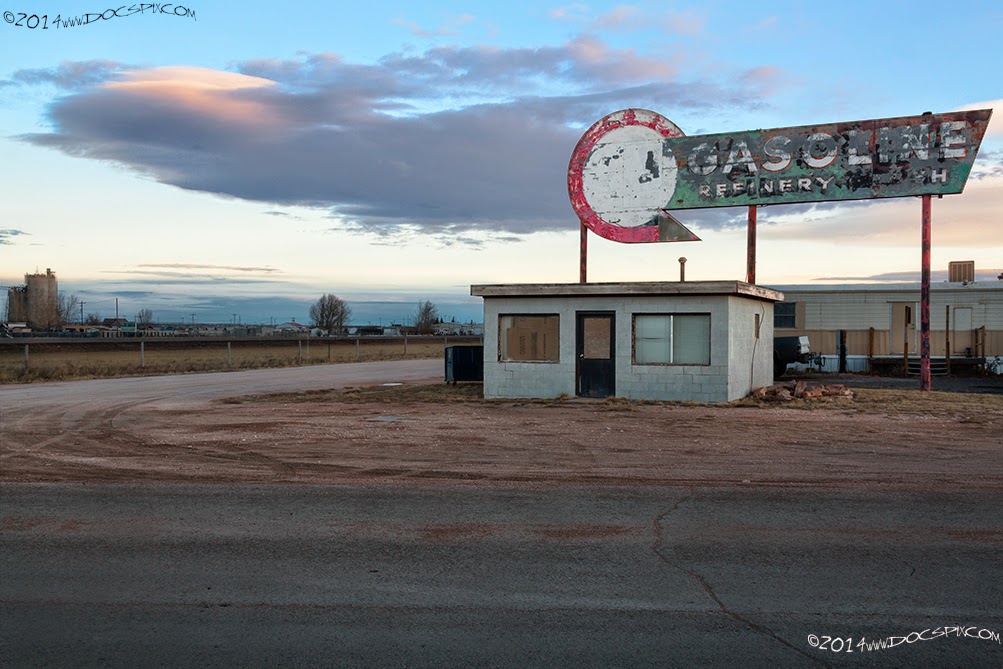 The town of Bosler, Wyoming was one of the many victims of the modernization of America. Similar to other small towns that dotted the landscape of the American West in the early to mid-twentieth century, this town all but disappeared when the Interstate Highway system was completed and by-passed the town twenty miles to the south. The town’s Post Office was incorporated on May 3rd, 1900, and closed sometime in the mid-1980’s.
Bosler was originally a rail stop for the ranch concerns of the Bosler family, who owned two ranches and other businesses in the area. According to the 1940 U.S. Census, the town boasted a total of 264 souls; had a garage, two motels, and a handful of other business concerns.
The town’s population has dwindled to its current residency of less than ten. Only one commercial business remains: Doc’s Western Village. It’s primarily a furniture outlet, and most people driving through would assume it to be closed, given the signage hasn’t been updated in over twenty years.
This town is an example of what has been left behind in the name of progress. This is a place where people lived, enjoyed a livelihood and raised families. A place where people knew each other; attended Saturday night dances, and Sunday morning church services. Today, it’s nothing more than a disappearing dot on a map. The one remaining store was converted from one of the motels, the other motel had no indoor plumbing. It had four cabins along with a his and her outhouse. It stands as a sculpture of buildings weathered and beaten by time; how much longer they will remain standing is anyone’s guess.
I’ve often travelled through towns like this, and questioned; who thought this place would be good for some defined or undefined purpose? What was the attraction? Why did this place begin to fade? What caused its demise? Economic conditions? Environmental concerns? Were the local resources exhausted? Where did the people who occupied this space go? Did they die? Move on? When did they leave? Have they ever come back to see what they left behind?
I seek answers to these questions, and I only wish to capture the remains of the structures before they disappear. I also yearn to find beauty in the desertion, desolation, and dilapidation of what has been left behind in the isolated and forgotten places such as this.

Another semester is done, and the road ahead is long. I'm still working on the Laramie Midwest Refinery project, and have started a new web site/blog specifically for it. It can be found at laramiemidwestrefinery.com Unlike this blog, the refinery web site will be site-specific, and will include much more information than I've already posted here. It's also laid out differently than this site, in that there are specific pages for not only portions of the property, but pages that will have most of the research I've conducted. Happy New Year! -Doc
Posted by Doc at 7:06 PM No comments: